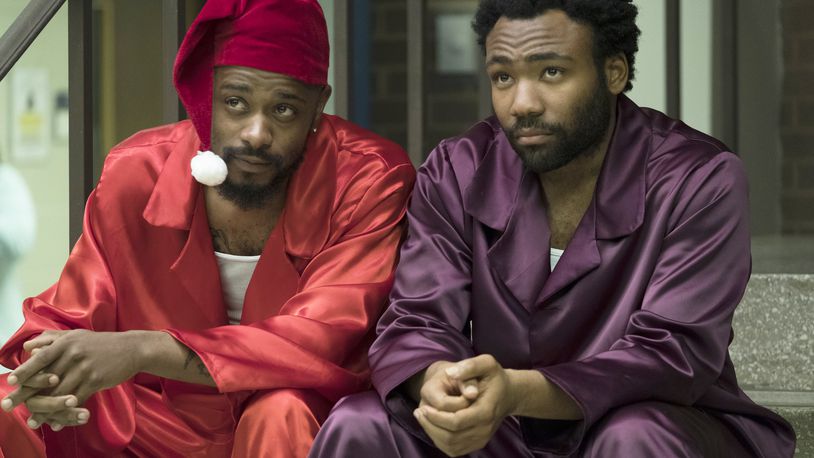 Donald Glover and LaKeith Stanfield have caused a bit of a stir on Twitter for their on-screen kiss on a recent episode of Atlanta.

In episode 6 of Season 4, Earn and Darius (Glover and Stanfield) are in search of some rare Nike Miracles and follow up on a lead that the mysterious “Shoe Man” has their exact sizes. They agree to meet in the Shoe Man’s van in the parking lot of the strip mall to make the purchase.

Upon entering the van they ask him: “How much for the shoes?” The Shoe Man replies: “None really, just let me see yawl two kiss in the backseat.”

From the outset, Earn is totally against the idea while Darius is willing to do anything for the kicks. Stating his case for why they should pucker up for the vintage sneakers, Darius says: “So, what, you want to kiss a stranger?”

After some coercion, Earn goes along with the plan and they kiss for the seller’s required time length which was 10 seconds as K-Ci and JoJo’s “All My Life” plays in the background.

“Umm.. @donaldglover, this what the 1 entertaining show that didn’t have gay black men on the show & this is wtf y’all had to do?? AND THEY ACTUALLY KISSED,” one user wrote in shock.

A second user wrote: “Bruh he want these n-ggas to kiss for 8 minutes for same damn shoes. That’s a whole make out session. I’m not even doing that with my woman.”
Other Twitter users defended the scene sharing a few words for those who claimed Glover had a hidden agenda for the scene.

“Nxggas really made a big fuss about Donald Glover and Lakeith Stanfield kissing in the latest Atlanta episode… that was a grandma kiss bruh…,” one person argued. “There’s no gay agenda to feminize the Black man. You cannot turn gay. You either born that way or you aren’t. Shut that soft s*** up.”

Another said: “Mfs are upset because the show Atlanta had Darius and Earn kiss scene, saying ‘it’s being forced atp, throughout the entire they was not kissing so why now’ why do you mfs be so bothered by other people’s lives.”
Besides causing an uproar on Twitter, Atlanta is nearing the end of its fourth and final season. While season three centered on the crew’s adventures overseas, the fourth season chronicles their adventures after returning home.

As the acclaimed drama comes to a close, Glover is already plotting his next moves. In April, it was announced that he landed a role as the co-lead on the series reboot of Mr. & Mrs. Smith to be streamed on Amazon Prime Video.

On the music side, the “This Is America” rapper/singer said back in March that he was creating new music but did not share a release date or name of the project.

His last album, 3.15.20 was released in 2020 and fans have been clamoring for the return of Childish Gambino. Glover reassured his fans that he’ll be dropping some new songs in the future while making an appearance on Jimmy Kimmel Live.

“I’m making a lot of music. I really love doing it,” he said. “I’ve made a bunch of it. It’s just really about how to experience it at this point.”